Saturday is a big day for Knott’s Berry Farm in Buena Park, California. April 1st is the start of not only their popular Boysenberry Festival (we’ll have an article all about that tomorrow) but also launches a brand new virtual reality game called “Showdown in Ghost Town,” which pits you against murderous robot cowboys bent on destroying Ghost Town. 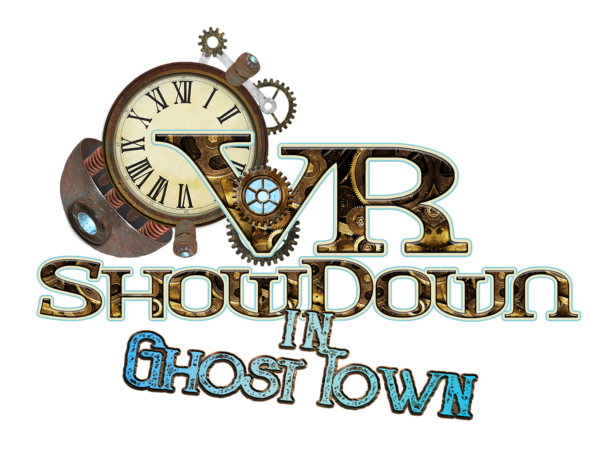 I like a fun new adventure as much as the next guy, but I really wanted to bring some experts along with me to give this new Knott’s experience a whirl. I’m pleased to share not only my thoughts on the experience, but those of gamers and virtual reality experts Nick Tierce and Hastin Zylstra as well.

Right off the bat, let me set your expectations correctly. This isn’t a ride or even the usual theme park attraction. It’s more of a fancy arcade experience. And Knott’s sets that expectation wisely by placing “Showdown in Ghost Town” in the former Laser Tag arena adjacent to the Knott’s Boardwalk Arcade.  In fact, you use your arcade game card to pay for the $6 three minute experience. 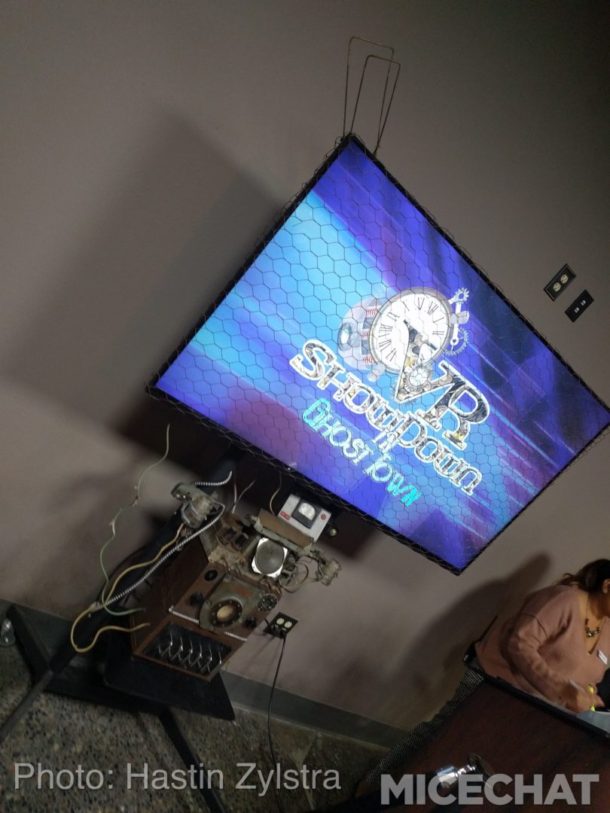 The entire experience is steam punk in its design and echos the look of the Voyage to the Iron Reef attraction located above it. You’ll walk right past Showdown in Ghost Town when you exit Iron Reef, so it all feels very thoughtfully built. 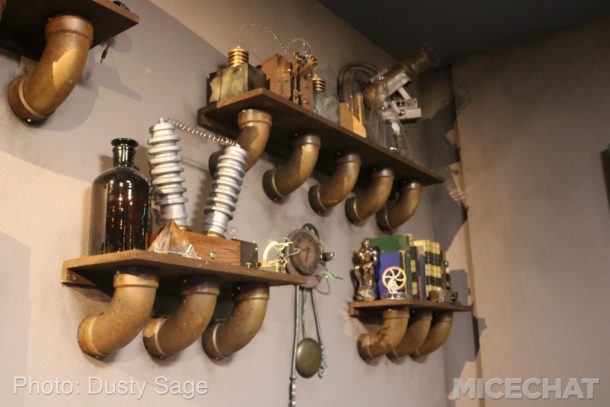 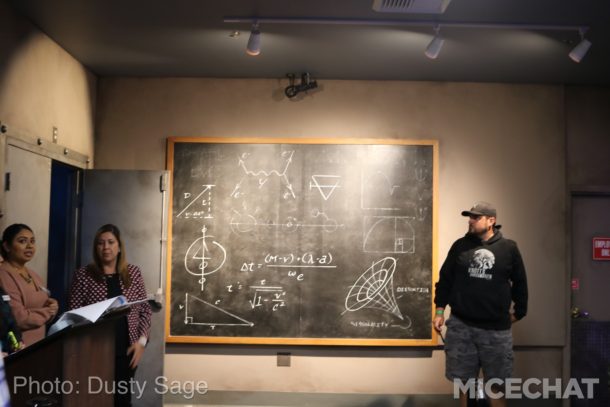 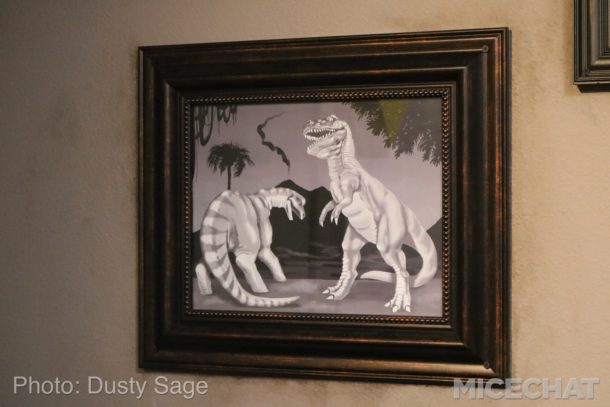 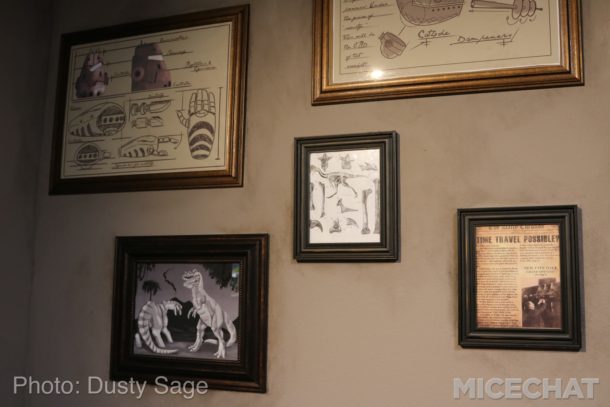 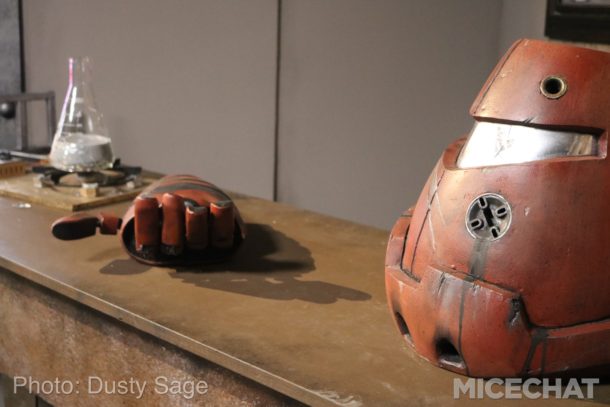 This isn’t an off the shelf game system like you might find at home. All the equipment was custom built by VRstudios to meet Knott’s specifications. You’ll wear a VR helmet, and stereo headphones are placed on top of that. Once you’ve been suited up, staff bring you your gun (which you can see floating toward you in virtual space). 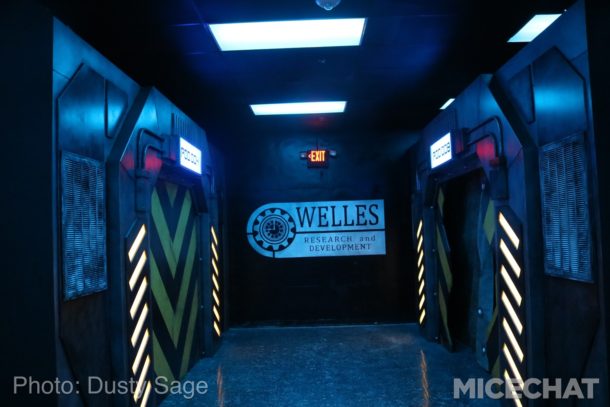 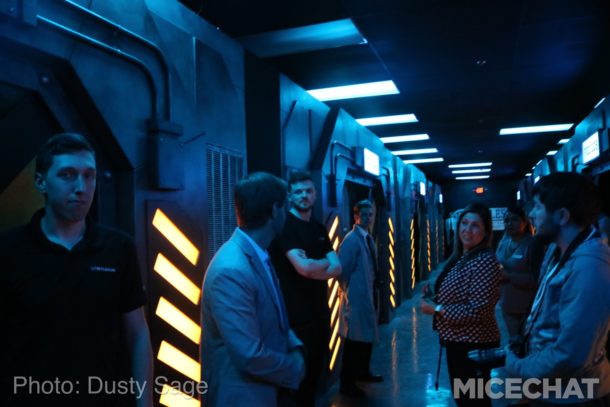 There are 8 battle spaces. Each space can hold two players. However, you can play with an additional two people in a connected room. It’s a neat bit of technology. You and your partner are on one side of the virtual street in Ghost Town and your friends can be across from you while you all battle together to save Ghost Town from vicious robotic enemies. You’ll even see avatar versions of your friends so you’ll know where they are and how everyone scores at the end of the game. 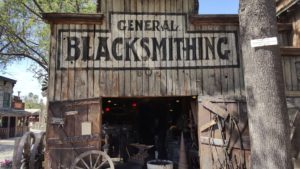 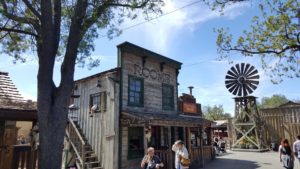 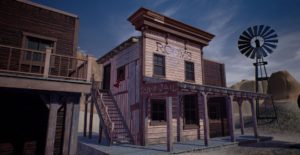 The experience ties into pre-existing Knott’s lore of Professor Welles’ Time Machine, and captures the likeness of iconic buildings from Knott’s Ghost Town. That may sound familiar to those of you old enough to remember the fun Kingdom of the Dinosaurs ride (that our good friend Bob Gurr helped build).

So, how is it? Let me share the thoughts of our resident experts.

Nick Tierce is a writer and designer in Los Angeles (You can find him on Twitter @NickyTea). Here’s what he had to say about the new VR experience at Knott’s:

Cedar Fair, VRstudio, and Knott’s creative team should be very proud of VR Showdown in Ghost Town. They chose wisely to frame the experience within their arcade, setting a level of expectation and thoroughly exceeding it. This interactive, 360° shooting gallery is a three-minute window into a bright future for the intersection of theme parks and VR. 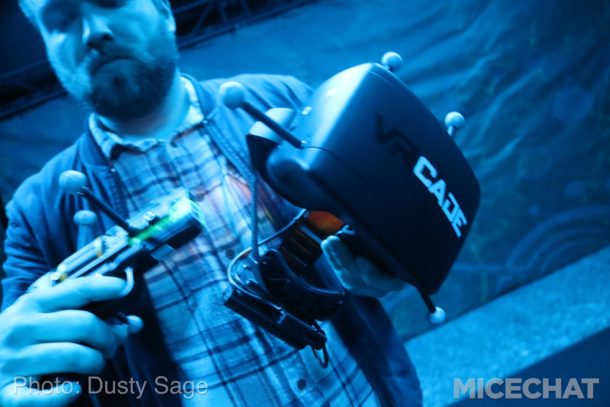 Nick shows off his blaster and VR helmet, both of which have position tracking so the system knows where you are in the game at all times.

As for the virtual experience itself, its breakneck pace left me wanting more time to explore the space, and I mean that as a compliment. Few arcade shooters can claim to have piqued such curiosity, and the incorporation of classic Ghost Town iconography into the landscape makes it feel uniquely local. (Not to mention, plenty of Easter eggs for fans of the park to unlock.) I particularly enjoyed a spectacular moment which saw me contorting on the ground to dodge debris from an exploding train … in slow-motion!

Between VR Showdown in Ghost Town and the immersive theater of last summer’s Ghost Town Alive, Knott’s has staked its claim on the new frontier of innovative theme park experiences by way of the Old West. I continue to applaud their their industry-leading ambition. With physical locations inspiring their new game world, I can’t wait to see how this interactivity might bleed back into the park in years to come.

At the core of the experience, VR Showdown in Ghost Town is an ambitious start to the world of VR in Theme Parks, and for what equates to fun video game with some Knott’s history tie-ins – it’s worth your time to experience at least once. Right now, the technology is clunky, requiring headsets, headphones, and expensive hardware. Looking to the future, with virtual reality, mixed reality, and other emerging technology – the future of theme parks could be what you want of it – detailed stories that tie the physical and the virtual together. 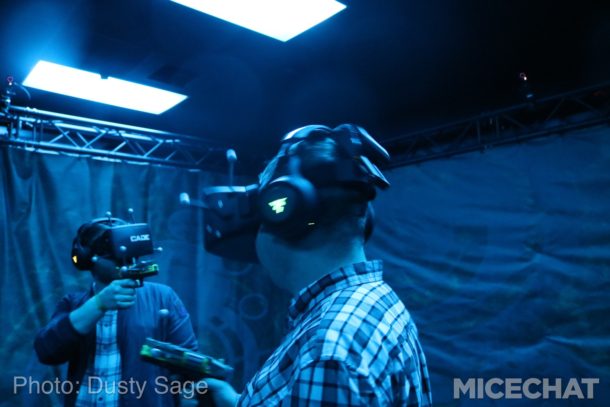 Nick and Hastin fully suited up with head gear, audio headphones and blasters.

Now, we’re at the start of something new. So go get your friends, play VR Showdown in Ghost Town, shoot a few virtual robot cowboys, get a high score and have fun – but realize that this is just the first step, and Knott’s and Cedar Fair are leading the pack towards these new interactive experiences, in the weird way that Knott’s always has.

So, here’s the nitty gritty. If you want to know how this game really works, what it looks like, how to score big and what to look for . . . read on. If you want it all to be brand new to you, you can stop here. I don’t want to spoil the game for you, but if you are like me, you are going to want to know how to kill the enemies and what to look out for so you make the most out of your $6 experience.

Melee enemies spawn around the town and run towards the players. When they get onto the train platform that the players are standing on, they activate their lightning clubs and charge at the players. Every time the melee robot’s lightning club hits a player, they lose points, so players must dodge incoming attacks or shoot the robots before they get the chance to swing. 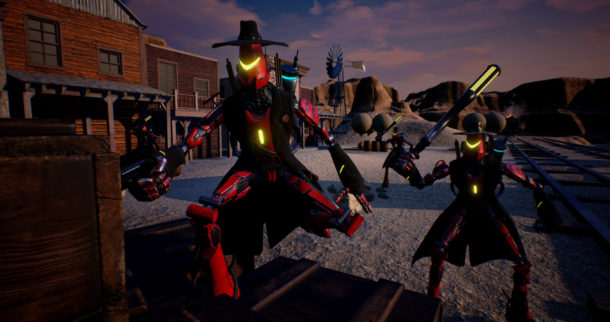 It takes 2 shots to kill a robot if you shoot their bodies or 1 headshot. (so shoot for the head. I didn’t know this when I played).

There are 3 Mini-Bosses in the game that are leaders of the robot army. They have distinct colors, unique props, and clear objectives to destroy certain buildings of Calico. Players must shoot the mini-boss robots before they cause damage to the town. The quicker players destroy the mini-boss robots, the more of the town they will save.

In addition to the regular robots who all want to kill you, there are some dastardly mini-bosses trying to destroy pieces of Ghost Town.

Forge Bot is a large orange robot with a hammer that wants to use the anvil in the blacksmith shop to create mini-robot minions. Players must shoot Forge Bot before he gets to the Blacksmith Shop or risk him creating minions and destroying the shop.

Torch Bot is a large yellow robot with a torch that wants to light the hay on fire to burn down the warehouse. Players must shoot Torch Bot before he gets to the warehouse or risk him setting fire to the hay. The only way to quench the fire is to shoot the water tower. 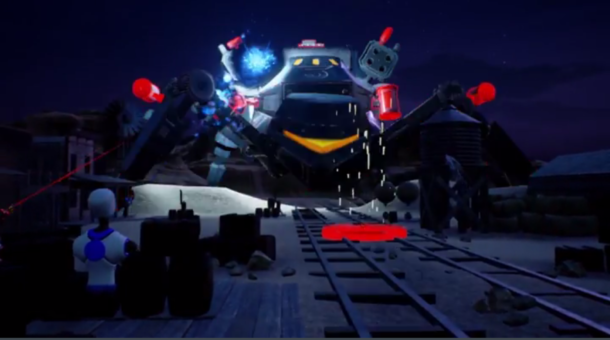 The boss robot appears at the end of every Showdown mission. He is Professor Calek’s secret weapon and controls a tractor beam that pulls the Bank safe towards a portal. Players must destroy the boss robot before he steals the safe.

When in doubt, if it looks evil, shoot it in the head. It’s like a zombie infestation but with robots.

And here’s the real spoiler. This is a full play-through of the game.

I think this is really neat. Knott’s has not been shy about sharing the credit on this experience. They have been telling everyone that this is a collaboration between Cedar Fair, Knott’s Berry Farm and VRstudios. It’s very rare in the theme park world for designers and other staff to be given individual credit and we wish this would happen more often by all of the other theme park companies. Kudos to Knott’s and congratulations to the project leads listed below: 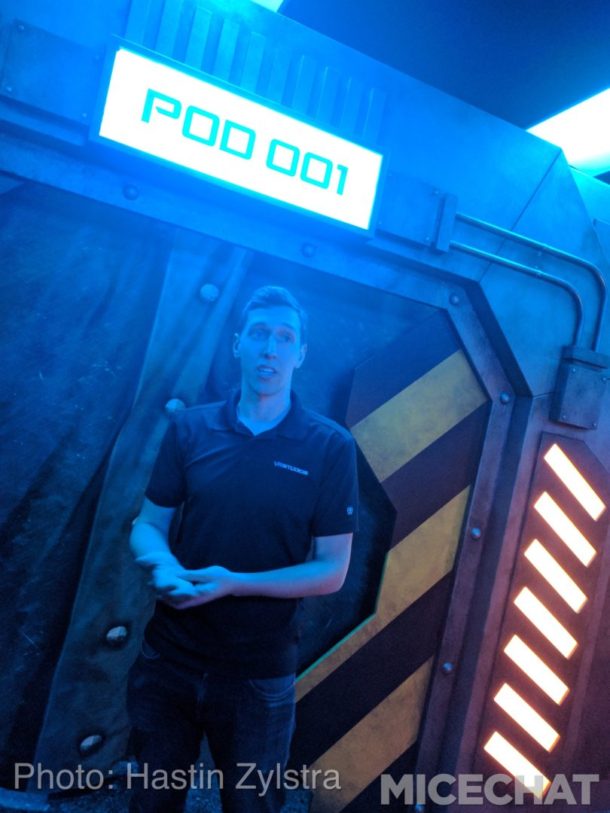 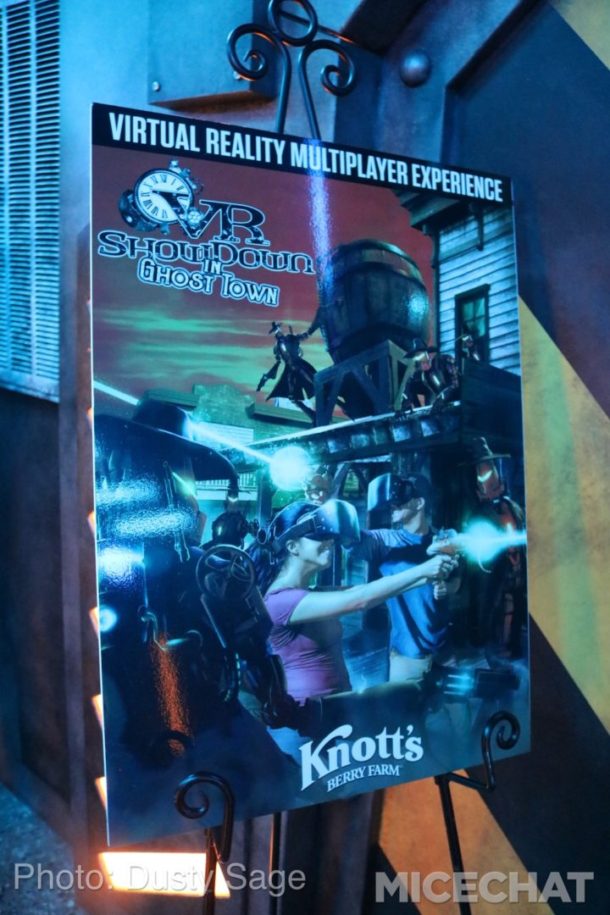 Showdown in Ghost Town officially launches this weekend in time for Knott’s Boysenberry Festival. Give it a whirl and let us know if you were able to save Ghost Town from our evil robot overlords!

Dusty is the founder and CEO of MiceChat.com. When he’s not visiting theme parks and writing, editing or speaking about Disney and theme parks worldwide, Dusty stays busy as the Executive Director of both the Walt Disney Birthplace AND the Dick Van Dyke Foundation. He also run’s O-Zell Soda (the company originally operated by Walt Disney’s father and at which Walt once worked). If you’ve got news or photos to share with the MiceChat community, or would like to book Dusty for an upcoming event, please contact dustysage@micechat.com